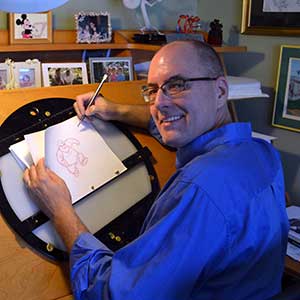 Tom Bancroft was a Walt Disney Feature animator for 12 years.  He has been nominated for an Annie Award, two Rueben Division awards (for animation and comic books), spoken at the Kennedy Center, and at art schools around the world.

While at Disney, Bancroft had the opportunity to animate on 8 animated feature films and 5 animated shorts.  Some of the classic films include: Beauty and the Beast, Aladdin, The Lion King, Pocahontas, Mulan and Brother Bear.  For Mulan, Bancroft created the character of “Mushu” the Dragon, voiced by Eddie Murphy.

Additionally, Bancroft has written and illustrated over 50 children’s books, along with creating two art instruction books on the subject of character design, “Creating Characters with Personality” and “Character Mentor”.  Both books have become the most recognized books on designing characters for animation, video games, comic books, and film and are used as textbooks at the top animation schools around the world.  Bancroft has created comic book art, character, and toy designs for the largest comic, toy, publishing, and animation studios in the world, including: Marvel, DC, Random House, Scholastic, Spinmaster, Hasbro, Lego, Disney, and Dreamworks.